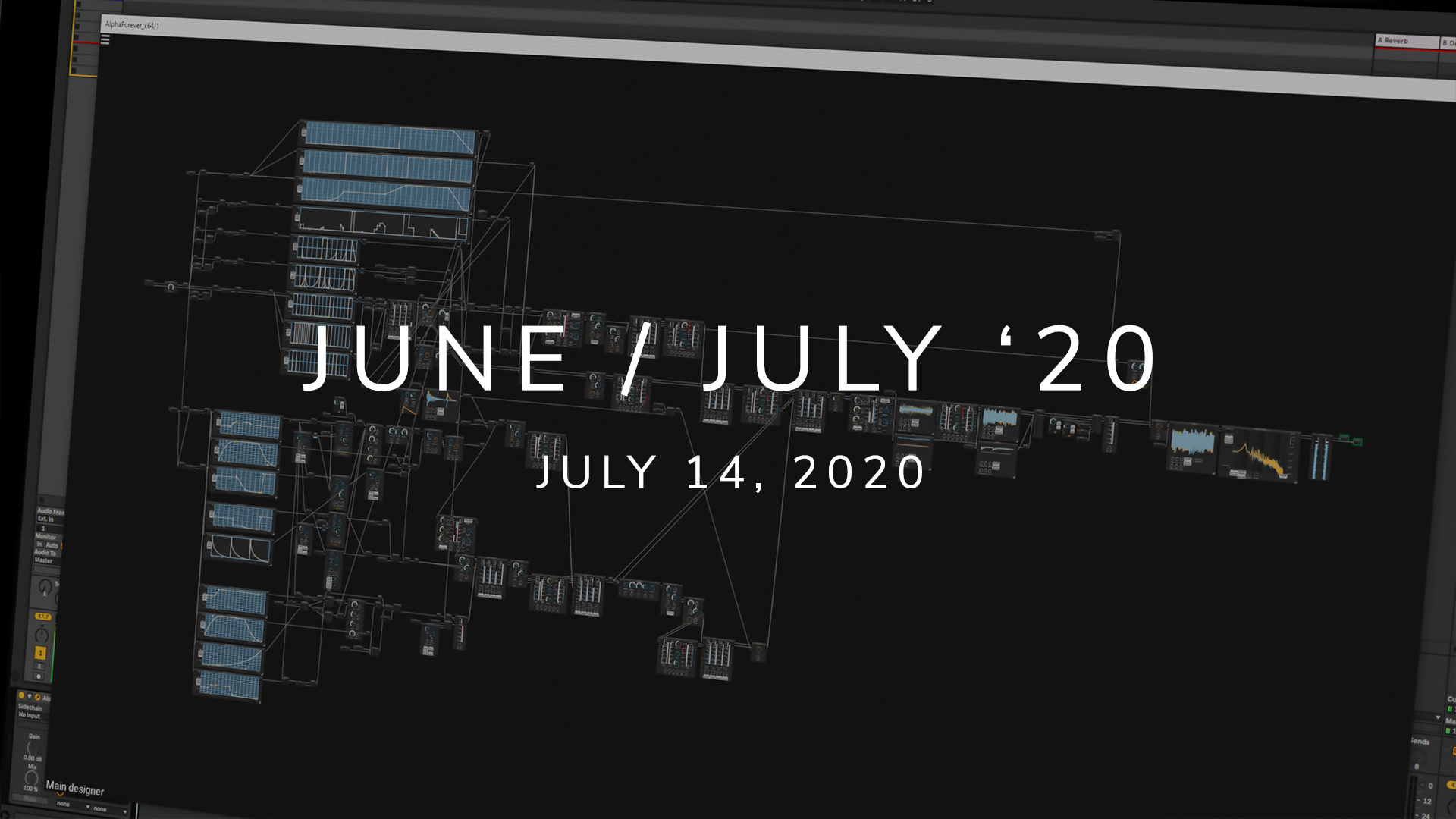 Did we go silent?

The answer is of course: no, we did not go silent at all. Alpha Forever is still under heavy development. All the tools to create any non-sample based synth sound and DSP effect are already available to you in the current official release, but this does not mean, that the development of this plugin won't go on forever. There's lots of new nodes being prototyped at the moment, but there's already a nice amount of new goodies implemented, that will be featured in the next release. The new tools will give Alpha Forever a new flavor, since we are mainly focusing on tools related to mixing and signal processing.

Processing dynamics is essential for creating nice sounding mixes. This compressor delivers a transparent sound, and has all the typical parameters. Due to Alpha Forever's modular fashion, the possibilities of combinations with other nodes are endless.

You'll be surprised, how well EQ's with such simple structure fit in Alpha Forevers modular environment. Each EQ node has additional outputs for the filtered signal only, and you'll also have access to the rest - which is the unfiltered part of the signal - as well. These outputs make these nodes able to work like a filter, or as a band splitter for multiband processing.

Sometimes we require more than the simple linear mixer we had until now. The new Mixer 4 Stereo node will allow 4 tracks with gain and panorama control, and mute switches.

The stereo track is one track of the Mixer 4 Stereo node, but you can also look at it, like the logarithmic alternative of the 'Gain lin' node with pan control included. It's a nice final stage of a patch.

Our own version of a dynamic processor. Back in the days we used to sell this little device as a separate plugin, but since Balázs prefers this algorithm over compression, and can't live without it, we had to include it in Alpha Forever too. Anyways, we did not leave even this piece of gear unchanged. We removed the filter part, since Alpha Forever has plenty of options for filtering, and at the same time we changed the 'Maximum size' parameter from a linear ratio to a logarithmic 'Maximum difference' parameter, that may be more intuitive to use. The 'To' parameter got simply renamed to 'Target', that we think describes the task of the slider better. These changes did not affect the sonic quality: it's the same as the sound of the original Dynamix device, that was used in every 9b0 track for dynamic processing and level maximization.

Sometimes a 1 sample long delay is added to the signal flow at some point. This usually happens, if there's a feedback somewhere in the patch. Alpha Forever indicates these small delays with a Z sign in a circle right before the plug, where the delay happens.

We reviewed the way Alpha Forever processes nodes, and added the option to visualize this.

This node is not finished yet, but it's way too hard to resist posting about it. A spectrum analyzer can do more than just being a fancy display of the spectrum. The gate input allows for exact control over the signal that gets into the FFT buffer, and makes the analyzer a great tool also for visualizing things, like filter frequency response graphs. Oh... and it's scalable, and can run with 60 frames/sec refresh rate if you want to... With this node Alpha Forever got more than "just" a synth, or a custom DSP effect: it's a complex modular signal visualization tool.

Optimizations, fixes and 'under the hood' improvements are also going to be part of the next package.

Probably some more nodes will also join the party

If all of the above is not enough, 3-4 additional nodes are likely to join the next release of Alpha Forever, but let's don't want to spoiler everything.